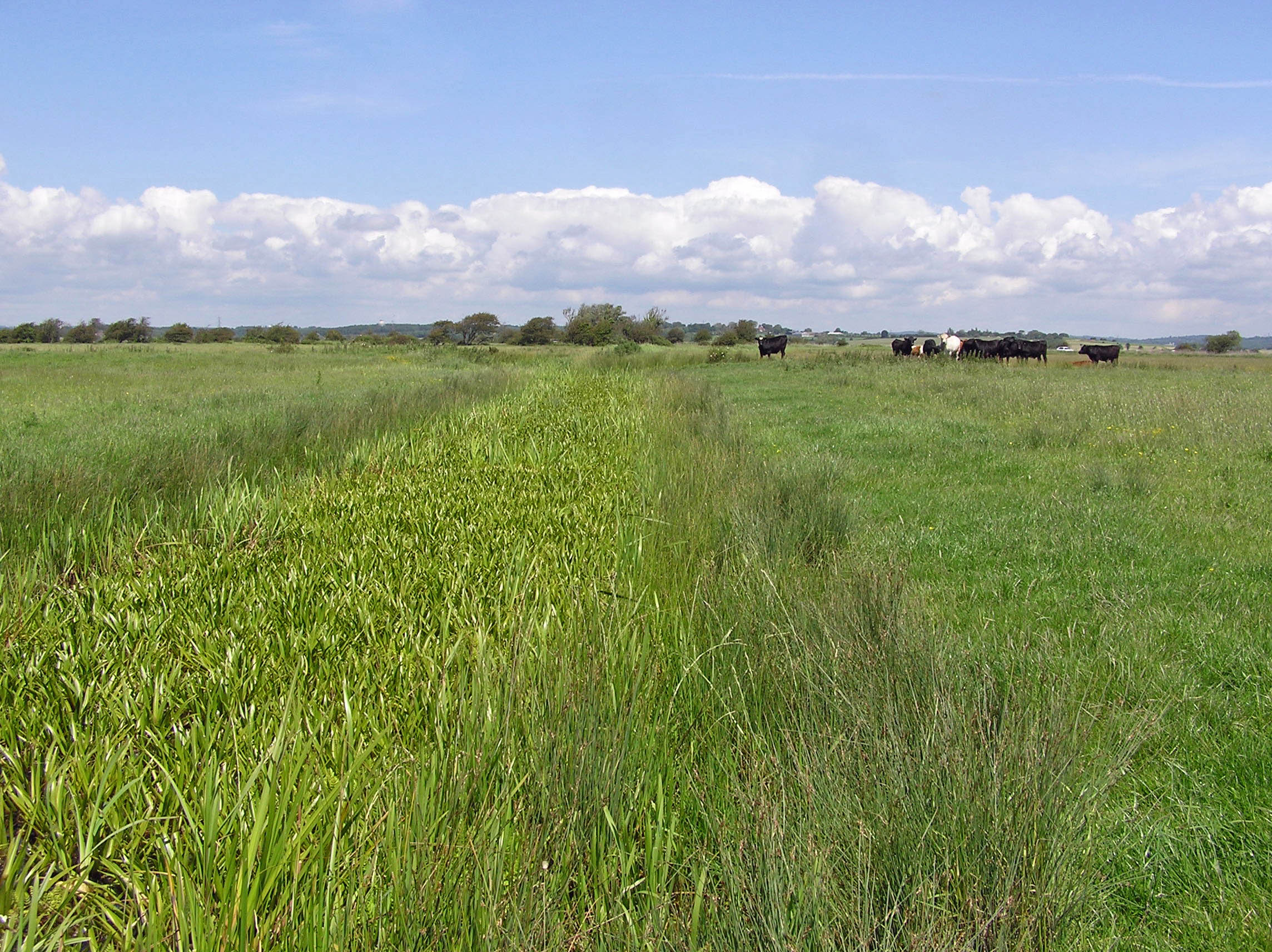 The Pevensey Levels is a low-lying area of agricultural land between the towns of Eastbourne and Bexhill in East Sussex, on the south coast of England. It comprises one of the largest continuous lowland wet grazing systems in south-east England. Despite extensive arable conversion, around 3,500 ha of grazing meadow remain, intersected by a complex network of ditches. The aquatic communities supported by these ditches include 68% of British aquatic plant species and many nationally rare invertebrates. The national and international importance of the area is reflected in its designation as an SSSI and RAMSAR site. Some of the best habitat (181.6 ha) is protected as a National Nature Reserve (NNR), 130.2 ha of which is managed by the Sussex Wildlife Trust (SWT). Although the Pevensey habitat is very different from that at Redgrave and Lopham Fen they share important characteristics in common with one another and with most western European D. plantarius sites. Both are lowland wetlands fed by neutral to alkaline, base-rich water, with open water areas persisting throughout the year. The structure of the emergent aquatic, and riparian, vegetation is critical and more important than its species composition (Smith 2000). The requirement for stiff-leaved, emergent vegetation to support the spider's nursery webs, which is met primarily by Cladium mariscus at Redgrave and Lopham Fen, is fulfilled on the Pevensey Levels by a range of emergent marginal species such as Carex pseudocyperus and, in places, by the stiff leaves of the floating rosettes of Stratiotes aloides.

Following the discovery of D. plantarius on the Pevensey Levels in 1988 (Kirby 1990), English Nature (now Natural England) commissioned a large-scale survey of its range and abundance in 1990 (Jones 1992). This survey, of ca 90 km of ditches throughout the SSSI and in adjacent areas, revealed a very extensive population. In the areas of best habitat, primarily on the lower-lying marshes drained by pumping rather than the higher gravity-drained areas, densities were often very high with nursery webs averaging one per 2 m of bank. Away from this core area, however, the gravity-drained marshes supported a much lower population density and the population appeared to be very fragmented. On the basis of nursery web counts, the total adult female population was estimated to be in the order of 3,000 at a time when the Redgrave and Lopham Fen population was thought to have, at best, only tens of adult females. More recently, largely through survey work in relation to planning issues around the fringes of the Pevensey Levels, several new outliers of the D. plantarius population have been discovered, expanding its known boundaries.

Although the Pevensey population was much larger than that at Redgrave and Lopham Fen in 1990, it is widely considered that habitat quality on the Levels had declined during the previous fifty years. Drainage schemes implemented in the 1960s and 1970s substantially reduced water levels and allowed further conversion of pasture to arable. Water quality also declined and some of the main channels became eutrophic. A further threat to the rich species assemblages of the ditches has come from dramatic increases in the populations of invasive non-native water plants, including Azolla filiculoides, Crassula helmsii and Hydrocotyle ranunculoides.

Since the early 1990s, efforts by the Environment Agency, Natural England, the Sussex Wildlife Trust and local landowners, have addressed these problems and resulted in major changes in water level and land management on the Levels. A Wildlife Enhancement Scheme (WES) on the SSSI provided landowners with tiered financial incentives for environmentally sensitive practices, including water level and ditch management, reduced stocking rates and restrictions on agrochemical use. More recently, the introduction of a series of agri-environment schemes has provided further opportunities for landowners throughout the area to receive financial incentives for management practices that benefit wetland wildlife. Improved water level management has been made possible largely by the modification of existing sluices and construction new ones, together with better management of abstraction for public water supply.

To assess the response of D. plantarius to the changes in management on the Pevensey Levels, and to monitor changes in the extent and status of the population, a systematic, long-term, population monitoring programme is urgently needed for the area. Since the 1990 survey, data collection has been piecemeal with the only systematic monitoring focused on the Sussex Wildlife Trust reserve. There, since 2013, nurseries have been counted on each ditch, at one point during the summer, every five years.

Climate change models predict that the Pevensey Levels will become much less suitable for D. plantarius over the next 50 years (Leroy et al. 2013). However, potentially on a much shorter time-scale, sea level rise and an increasing incidence of extreme high tides must be seen as a threat to this population, the greater part of which is on the lowest-lying, pump-drained Levels that were reclaimed from salt marsh in the Middle Ages.