Dolomedes plantarius was not formally described from Britain until 1956 when the late and eminent arachnologist Dr Eric Duffey found it around the margins of peat pools at Redgrave and Lopham Fen, Britain's largest remaining valley fen at the source of the River Waveney on the Norfolk/Suffolk border (Duffey 1958). Fortuitously, his initial discovery was of a female that entirely lacked a lateral band, alerting him to the possibility that this was D. plantarius rather than the commoner D. fimbriatus, which is is not dimorphic for this feature. Click here to read more about the Redgrave and Lopham Fen population.

It was not until 1988 that a second population was discovered, 180km away, when Peter Kirby identified D. plantarius from grazing marsh ditches on the Pevensey Levels in East Sussex (Kirby 1990). This population had been known to biologists for several years but it was assumed to be D. fimbriatus. It had been known to local people for much longer and, in the 1950s, was reported to be common in the areas in which it is most still abundant. Click here to read more about the Pevensey Levels population.

The third UK population was discovered in 2003 on a disused canal near Swansea, South Wales, by local naturalist Mike Clark. Immature Dolomedes found on the near-by Crymlyn Bog National Nature Reserve were subsequently also identified as D. plantarius. Just as on the Pevensey Levels, this population was already known but thought to be D. fimbriatus: it had been discovered by late and great environmental campaigner Andrew Lees in 1978, but the record was never verified. Click here to read more about the populations in the Crymlyn Bog area.

The lack of reliable and verified historical records for D. plantarius in Britain makes it impossible either to assess reliably the extent of its decline, or to account for its present highly disjunct distribution. However, its extreme rarity is entirely consistent with the well-documented loss and degradation of wetlands in general, and of both lowland fens, and grazing marsh ditch systems, in particular. In addition, although verifiable historical records are lacking, a gathering body of evidence suggests strongly that this species was formerly present in areas beyond it current strongholds (see Historical Populations below).

As part of the long-term programme to prevent extinction and recover the fortunes of D. plantarius in Britain, new populations have been established by translocation since 2010. Click here to read about the translocation programme. 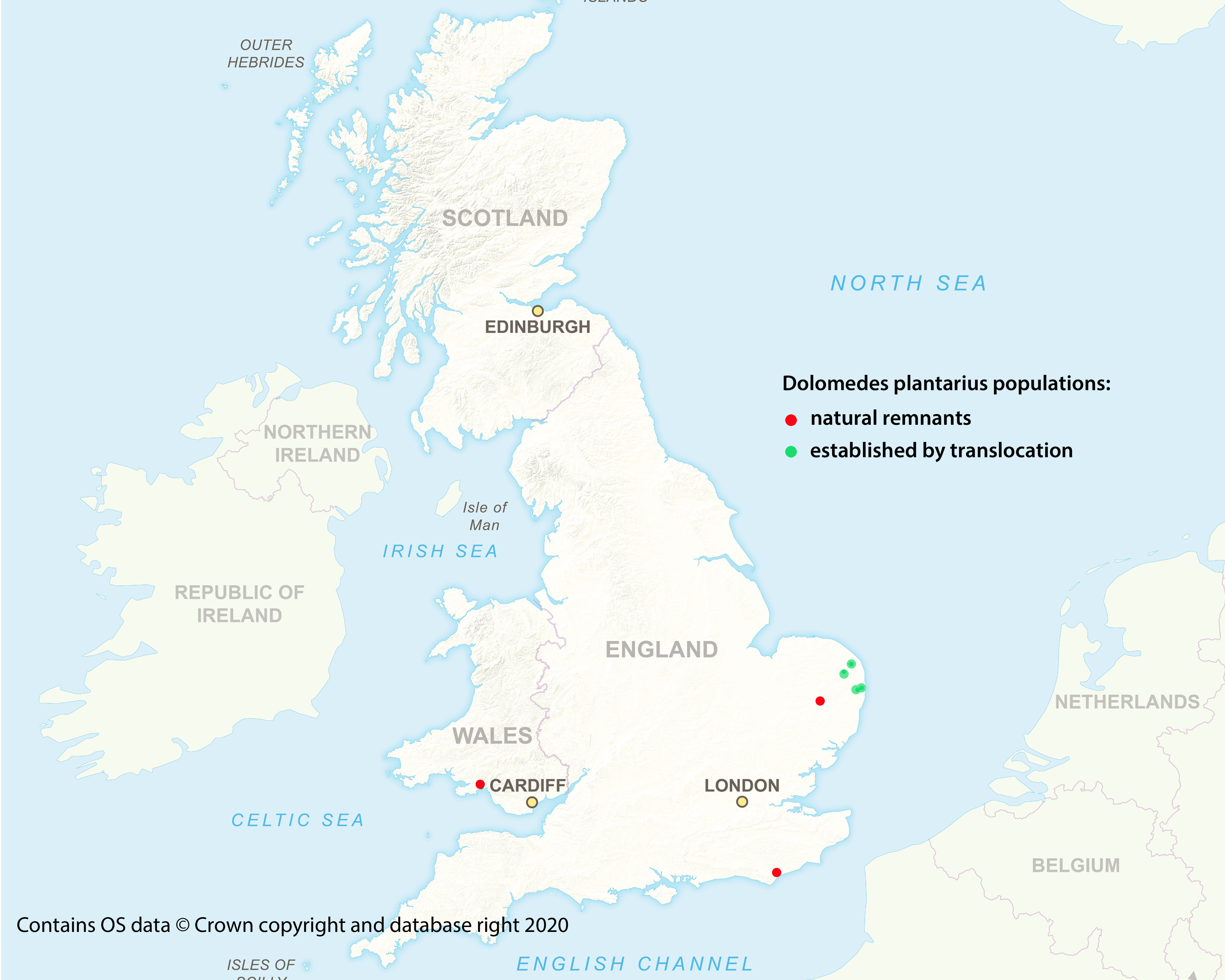 The current highly disjunct distribution of D. plantarius, in three of Britain's most intact and biodiverse lowland wetland areas, suggests strongly that it must formerly have been much more widespread. Although Duffey's 1956 record from Redgrave and Lopham Fen is the first verified GB record, and no adequately labelled specimens have yet been found in historical collections that definitively associate this species with other British locations, there is growing evidence of records of Dolomedes from locations that would formerly have had extensive areas of ideal habitat. These include the Cambridgeshire fens and the Norfolk grazing marsh ditches. But because the separation of D. plantarius and D. fimbriatus was not widely accepted until the 1930s, all early records were  identified as D. fimbriatus. Although investigation of some of these areas for Dolomedes might still have been profitable at that time, British arachnologists of the era dismissed the old reports as likely misidentifications of the large lycosid Pirata piscatorius.

Although it is likely that we will never be able to move beyond informed speculation about the previous distribution of D. plantarius in Britain, the many and diverse reasons for this, and the historical evidence available (e.g. see Dawson 2020 & Smith 2018, 2020), are important to the conservation case (contact me if you are unable to obtain any of these articles).

Dawson, I. 2020. Dolomedes in Cambridgeshire. Newsletter of the British Arachnological Society, 148: 8-11.